Tuesday, May 31, 1988 in the Cideng area, Jakarta. It was dusk when the accident happened to Anaconda Bangkara. At that time he had just picked up his friend. They agreed to go to their friend's aunt's place to watch the Thomas Cup live broadcast on television.

The accident happened. The Bajaj they were riding in was hit by a bus. Anaconda was badly injured. When he was brought to the Husada Hospital, the closest hospital to the crash site, he seemed to be in between life and death. A number of his bones were broken, cracked and even crushed. Fluid drained from the cavity of the brain, the skull shifted, and the focus of the eye was no longer the same. The direction of view of the left and right eye varies. Ienjo, as he is usually called, said, “At that time I felt numb from the waist down. So even when my feet were sewn without anesthetics I didn't feel anything."

According to the doctor, at that time there were only three possibilities for Ienjo. First, if the bleeding doesn't stop, or the blood comes out of his nose, he will no longer have any hope of life. Second, he will be in a prolonged coma. Third — and this is the best option — even if he recovered, he would be mentally disabled.

A choice that made him wonder, "Why would I live in these conditions?"

One of the doctors who handled it at that time, dr. Gunawan, a neurologist, encouraged him in a different way. He invited Ienjo to talk about sports. He said, “You like football? Who are you holding the European Cup this year? "

Dr. Gunawan made Ienjo's anxiety less about his condition. Ienjo recalled, "From the way he communicated, I thought he was a great doctor." The importance of communication is a topic that Ienjo then raised in his doctoral dissertation at the Bandung Institute of Technology (ITB).

While treating Ienjo, dr. Gunawan advised him. "We pray and keep fighting. God will surely love the way. Now the important thing is that all medicines from the doctor must be taken. All food from the hospital must be eaten, ”said Gunawan.

When Ienjo was still in a critical state, the doctor kept reminding him, "Now the important thing is you don't sleep and don't vomit. Also, don't think. " At that time Ienjo interrupted weakly, “Doc, how can I not think? I still have to think." Ienjo was 25 years old at the time, and was completing his undergraduate program majoring in Planology, ITB.

The doctor smiled, "Now if you still want to think, that means you can still be healthy. Now let's fight." The doctor's words had encouraged Ienjo to survive. This is something important because besides physical problems, Ienjo's biggest problem after the accident is psychological. "In an instant I felt helpless and full of limitations," he said honestly. Besides that, after three months in the hospital, Ienjo had to undergo a long recovery process.

During that time, for example, he could only eat three types of liquids: liquid from rice or starch water, from carrots, or water from green beans. Then, every day he has to eat 17 types of drugs, three times a day, plus injections at a dose of four times per day. As a physical therapy, every morning he also has to dry his back and soak his feet in running water.

Everything he had to live for almost four years!

Honest is Black or White, not Gray

Ienjo was born and raised in Bandung as an only child. His siblings died as a child. His father is a civil servant who works in Jakarta. This condition made Ienjo often commute from Bandung to Jakarta, especially when his father's health condition worsened. Within a week, Ienjo can be in Jakarta for three days. This is also what makes his school in high school difficult.

His interactions with his father and his social life have made Ienjo gain a lot of life experiences. For example, he learned from experience when he was a Boy Scout.

Once while attending a camp in the Cikole area, Lembang, Ienjo got the task of cooking rice. At that time he was a child. The results are certainly imaginable. Yes, the rice is charred. Crusty.

At first Ienjo was worried that all of his friends might be disappointed. In fact, not. They deliciously eat crusty rice. From there he learned about the importance of contributing to group life. Experiences that he did not find at home.

Ienjo also likes to exercise, of course when he is still healthy. Many branches he joined. Badminton, tennis, football and many others. “Through sports I have learned a lot about the importance of honesty when competing, sportsmanship and cooperation. What good is winning the match if it is done through dishonorable means, "he said firmly. 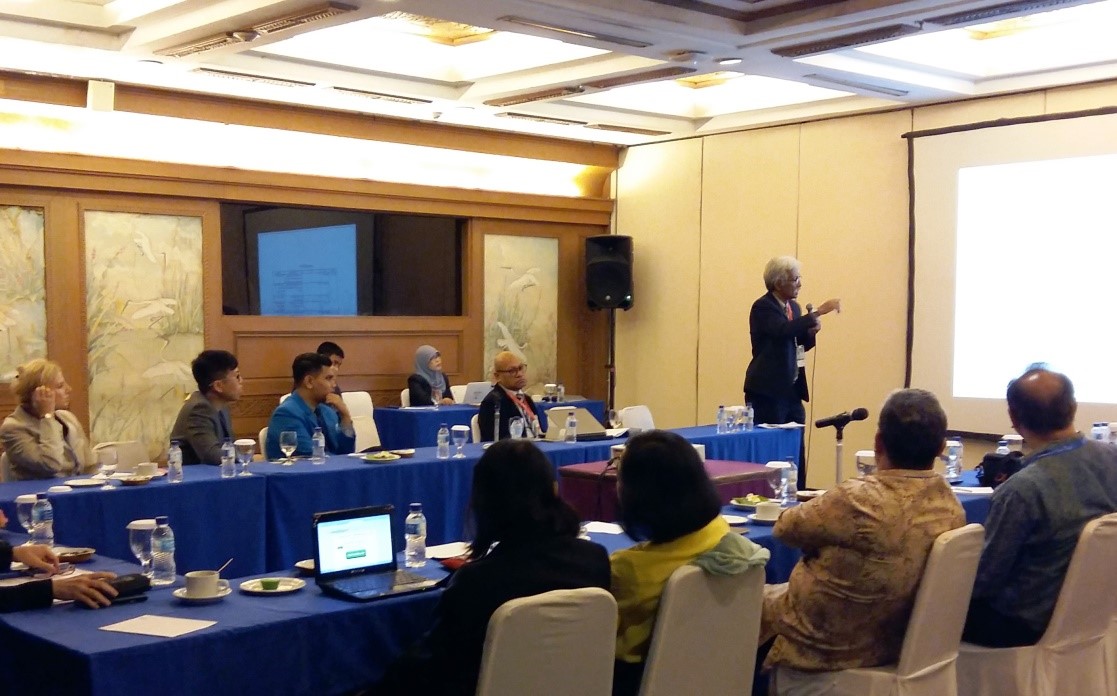 Anaconda Bangkara (standing in front) as a speaker in the discussion session panel at the International Conference for Family Business & Entrepreneurship Seminar 2017 in Bali, early May.

His activities in organization made Ienjo's eyes open that his life was only meaningful if his presence was of benefit to others. Not the other way around.

Ienjo's father was straight. From him Ienjo learned a lot that honesty is black or white. Not gray. His father also taught Ienjo not to bring haram property to the house. "Because no wife and children are willing to be supported by haram property," he said.

His father also taught Ienjo not to make comparisons. Why? "Maybe what we compare is only a small part of what we know," he said. As a result, the comparison is unfair. In fact, said Ienjo, "The person who knows is the one who knows what he doesn't know. Not someone who knows everything."

With this attitude, Ienjo experienced many problems in several previous workplaces. "The main problem is the courage to be honest," Ienjo concluded. Finally, after searching for a long time, in September 2005 Ienjo joined President University.

Early in his career at President University, Ienjo was heavily involved in building the executive class, which is an evening class program aimed at corporate executives. In addition, he also initiated the establishment of an employee cooperative.

While teaching, Ienjo also continued his studies at ITB until he earned a doctorate. He completed his doctoral program at his alma mater with the topic of the dissertation Communication Model in Cross-Cultural Knowledge Share Derived from Indigenous Psychology in Indonesia Multinational Company. For this dissertation, Ienjo conducted research in a number of multinational companies in the Jababeka industrial area, Bekasi, West Java.

Why choose that topic? He said, apart from being impressed by the neurologist's way of communicating, he also felt that local culture was being abandoned by today's young people. “They feel more modern if they can dance Gangnam Style instead of Jaipong. They prefer to hang out at Starbuck rather than tegal stalls, ”he explained. So, he continued, the topic of my dissertation was not solely about communication, but about local culture.

Ienjo felt that his studies at ITB were paid for by many people. Among other things in the form of a scholarship he received. Now he wants to pay back this debt. How? "I want to defend their interests," he said. At President University, he did this by wanting to make this campus an educational institution that prioritizes character building. Agree! Now, apart from being busy teaching and guiding students, Ienjo is also assigned to lead the Civil Engineering Study Program, the Engineering Faculty, and the New Study Program Development Bureau. (JB Susetiyo, PR team)