DIVERSITY MUST BE A BLESSING

You told me that because you are in a more heterogeneous environment, Islam in Indonesia has become more advanced than Islam in Middle Eastern countries, which are relatively more homogeneous.

I often attend lectures at King Abdulaziz University in Jeddah. When I was the Ambassador in Qatar, I also secretly attended lectures at Qatar University. There I interacted a lot and interacted with the professors. I then conveyed Gus Dur's thoughts on the many misinterpretations and MIS implementations of Islam. The interpretation is wrong, and the practice is also wrong. That is because Islam is understood partially and superficially. As a result, I use the analogy of fried rice; if it is not cooked well, it will hurt my stomach.

Islam, like other religions, is essentially peaceful. So the Muslims bring safe and make safe. However, now Islam is being injured by Muslims themselves. There are acts of terrorism, fundamentalism, looks fierce, radical. Well, Gus Dur tried this. Islam is not only for Muslims but for all. Rahmatan Lil Alamin. Islam is for all humanity. For all humanity. So if there are Muslims who are selfish, do not respect others, that is wrong.

Then, in Islam, there is no teaching by force. If God never forces, let alone us. Should not. War is forbidden. A new war may be waged when we are fought. So it is defensive, not offensive. Many misunderstand this, especially when there is politicization—people who have personal interests but wrap it up in the name of religious interests. I also conveyed Gus Dur's thoughts on democracy, harmony, and diversity. Diversity should be a blessing, not a disaster. Just because there is diversity, we can learn from others.

Gus Dur saw that many religious teachings were distorted because their knowledge was still low. The function of religion is not to divide but to unite. So, religion must provide security, security. War is the last way to recover. That was Gus Dur's thought. However, because many people do not read, they do not socialize, so religion becomes a prison that binds us and makes us deprived of freedom and creativity,

May I know the academics' reaction at King Abdulaziz University and Qatar University when you conveyed Gus Dur's views?

They are shocked. I am optimistic that Islam can become the center of universal religious thought. Not only monolithic for a particular nation. Because Islam that Reached Gus Dur was Islam for everyone.

There are still many of our people who understand Islam in limited ways and time. For example, the problem of clothes, culture, and so on is not the main thing. The main reason is that Islam is for humanity. Islam for humanity. How we work to help others, Help others, love others, the same for substantive things. This is what is often overlooked.

We must deify the real God because there are still many who worship not God. They deify themselves, their own opinions, absolutely supreme. Gus Dur invites us to understand that apart from God, nothing is absolute. Everything is relative. If we all understand this, people will be low profile, not arrogant. He is willing to listen to other people but also dares to share his views. So there is a balance between human rights and human obligations. Nowadays, we demand a lot of human rights but forget about human obligations.

As a special staff of the Minister of Research, Technology and Higher Education, how do you see Indonesia's challenges in education?

Indonesia has formidable challenges, but we must be able to provide the correct answers. We have to catch up, first, in terms of quality. We cannot claim to be excellent and advanced. Who do you think that is? So we need to open ourselves up to the world's standards. If you call yourself a world-class university, you must measure it. For example, how many international publications, how many patents, how many international students, how many world-class professors. 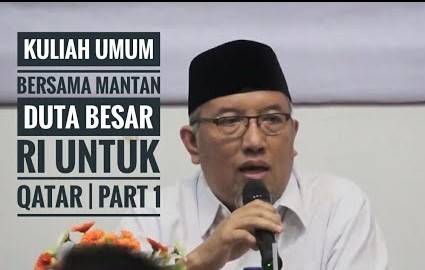 Second, access. We need to give affirmations, partiality. For example, provide more scholarships for students from outside Java. This is so that access to education becomes more equitable.

Third, relevance. Times are changing. Maybe in the past, the old ways were still suitable, but not necessarily now. Need updating. Change the curriculum so that universities can make a real contribution.

So it would be best if you had a combination. Not only the academic ability but also entrepreneurship so that students can be independent. Universities need to collaborate with practitioners, so that they can give colour to industrialization. What is produced by universities can be following the needs of industry and society?

Universities must also open up. If you wanted to become a lecturer, you had to come from a specific path; now, you need to be more open—for example, the practitioner path. Campus teaches academic skills and vocational skills so that it has an impact on daily life. There is a collaboration between industry, universities, and government so that they can empower each other. There is cooperation, mutual enlightenment. enlighten each other and

So far, there is a gap between what is learned on campus and world practice. Everyone has their world. Now, with collaboration, you can link and match, connected, so that everything can support each other.

Education is the most crucial instrument for alleviating poverty. So, access to education must be opened as wide as possible. Your opinion?

That is why education should be the responsibility of all, not just the government. Education is the responsibility of families, parents, society, political parties, anyone. It used to take hundreds of years to become a world-class university, such as Harvard, Stanford, Cambridge. However, universities in Singapore within fifty years have been able to overshadow the famous universities. How come?

First, they have a vision. So, here is the importance of vision. It should be clear and easily accessible to all stakeholders. It is not only accessible to lecturers but also the community and government. We must have the same vision.

Second, clarity. There must be understanding and understanding. So far, our education has memorized a lot, but it has not yet been internalized and reached, so it does not cause action. The movement stops at theory, not practice. The knowledge cannot be applied.

Third, agility, agility. We need improvement, especially regarding technology, including digital technology. We have to adapt quickly. In the future, it is not those who are big and robust who survive but those who are adaptive and responsive to change. How can we be adaptive? Must keep up with technological developments, use it to make our work more effective and efficient.

Fourth, we must have new intelligence, namely the ability to collaborate. This is no longer the era of single-fighter. They are growing fast today because of synergies and collaborations. Through cooperation, we will learn to multitask. This is important. Why? Look at current products, such as cellular phones. In the past, you could only make calls; now, you can use it to listen to the radio, watch TV, access the internet, take photos, and so on. So it is getting more complex. Well, technology will help us overcome complexity, making it more accessible. Everything, in the end, boils down to the ultimate goal of humanity, namely to be more prosperous, healthier, and happier. (JB Susetiyo, Gilang Suryanata, Lita Gabriela, and Silvia Desi Betrice, team PR)