MY 75% SUCCESS IS BECAUSE OF MY MOM'S EDUCATION

Can you tell us a little bit about your childhood?

I was born and raised in Bangkalan, Madura. I am an orphan. My father died when I was little. So, my mother became a widow with ten children. I am the 4th child. I am lucky to have a mother who has been shaped by repeated trials, tenacious, and diligent in prayer. She has incredible faith. One may have nothing, but as long as one still has faith, that is enough.

My mother used to remind her children every day to study hard. She understands the importance of education and the unpleasantness of being poor, stupid, and helpless. She taught us to always disciplin. I feel the results of her education. During elementary and middle school, my brother and I were always the champions at school.

What about the other brothers?

All of her children become bachelor. They are graduates of Universitas Airlangga, Universitas Indonesia, Universitas Gadjah Mada, or IPB. My mother, every day, every 3 o'clock, wakes up and prays. Very solemn. My morther believe that if we pray diligently and stay close to Allah. Insya Allah our prayers will be answered.

With a widowed mother and ten children, how was your family life at that time?

terribly unbelievable. I have been teaching junior high school students since high school grade II. My sister as well. She studied while teaching. So, we were all trained to be able to finance our own needs.

Can you tell me a little about dad?

My father died when I was in the fifth grade of elementary school. He was a lecturer at Sunan Ampel State Islamic University, Surabaya. In the past, my grandfather was a rich man. There are records, even the former Governor of East Java owed my grandfather a debt. However, life is like a spinning wheel. After grandpa died, everything went down. Mom and Dad were aware that this is a test. We can rise again as long as we are tenacious, patient, and keep striving. The principle, knowledge. She believes, if you want to be successful, you must have knowledge. So, she strunggle sent her children to school. Luckily when I was studying in the International Relations Study Program at Universitas Gadjah Mada, I became the best student, so I got a scholarship. That changed the situation. 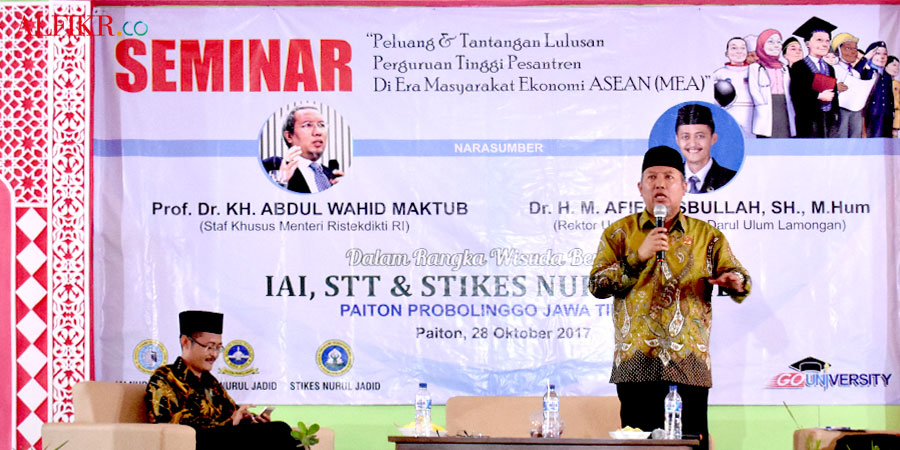 Gus Wahid when presenting material in a seminar in Probolinggo.
Source: alfikr.co.

What was the most challenging situation your family faced when Dad was gone?

Economic. To cover family needs, Mother was selling in the market. I saw how my mother was billed, but there was no money because it was used for the children's school fees. I am despondent. However, it became a whip for me not to be poor. So, after I graduated and worked, every time I came home, I always set aside money for Mother. My mother then distributed the money to needy neighbors.

To make my mom happy, I took her to America on a plane. First-class. At that time, I Can’t save my money because I use it to make her happy. I am well aware that 75% of my success is due to my mother's upbringing. I remember clearly what Mother said, “Do not hesitate, son. There is God. As long as you are clearly and sincere, God will give you what you ask for because God is Merciful.” (JB Susetiyo, Gilang Suryanata, Lita Gabriela, and Silvia Desi Betrice, team PR)