> Feature > President University Participates in the Establishment of the AHS

President University Participates in the Establishment of the AHS 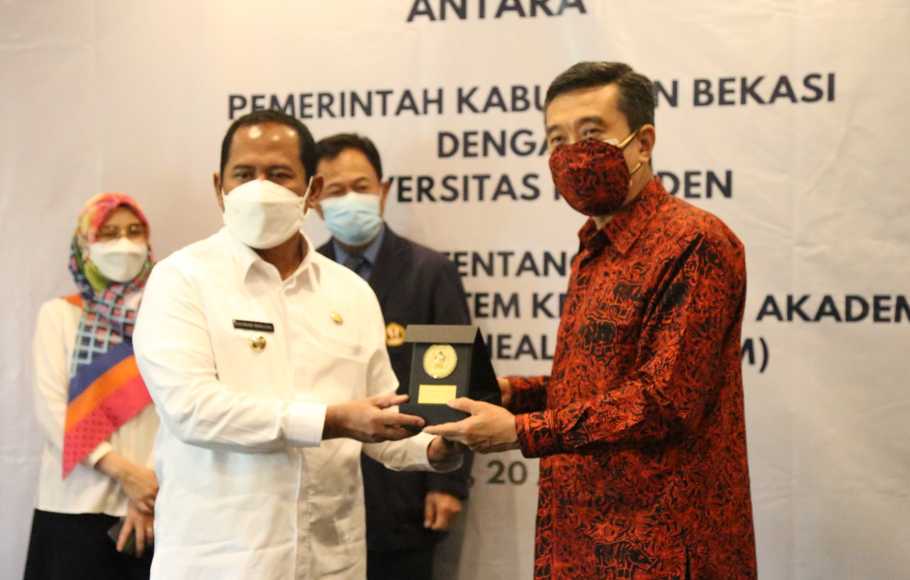 AHS is a collaborative ecosystem that involves three parties, namely health service providers in Bekasi Regency, such as clinics, Community Health Centers, Bekasi Regency Hospitals, and private hospitals; industry (which have in-house clinics, insurance firms,Occupational Health and Safety; and the Faculty of Medicine (FoM) PresUniv. Through this collaboration, it is hoped that higher-quality health care institutions and systems will emerge.

Also present were the Dean of the FoM, Universitas Padjadjaran (Unpad), Prof. Dr. Yudi Mulyana Hidayat, dr., SpOG(K)-Onk, DMAS. (FoM Unpad is guiding PresUniv through the process of establishing its own FoM).

Meanwhile, from the Bekasi Regency Government, the Regional Secretary Drs. Dedy Supriyadi, MM., the Head of the Health Office, dr. Sri Enny Mainiarti, Regional Cooperation Coordination team, and other staff. In addition, Plt. Director of Bekasi Regency General Hospital (RSUD), dr. H. Alamsyah, M.Kes., along with the board of directors of RSUD.

Meanwhile, Plt. Regent Akhmad Marjuki appreciated PresUniv's plan to establish a Medical Faculty. He said, “After hearing the explanation about AHS, I state that this collaboration between the Bekasi Regency Government and PresUniv really must be realized. AHS should not only be a symbol.”

The Covid-19 pandemic that has hit Indonesia and the rest of the world has taught a lesson that the World Health Organization (WHO) standards are not adequate. WHO sets a standard of 1 doctor per 10,000 population. Under normal conditions, the standard may be sufficient. However, in the event of a health catastrophe, such as a pandemic or other outbreak, the number is very less. This is certainly very detrimental because there will be victims who cannot be helped, including victims from among doctors and health workers. That's what happened during the Covid-19 pandemic in Indonesia and other countries.

The Covid-19 pandemic reminds us that increasing the number of doctors, including supporting facilities, is now a necessity. Do not let the health disaster, which claimed many victims due to the lack of doctors, be repeated again.

This condition has the potential to occur. Along with globalization, the interaction between countries and citizens of the world has become increasingly intensive. This makes the disease can quickly spread from one country to another, from one area to another. That is what happened during the Covid-19 pandemic. So, an outbreak or a pandemic can happen at any time.

Data from the Ministry of Health for 2019 revealed that DKI Jakarta has 6-7 general practitioners for every 10,000 populations. This is well above WHO standards. However, the neighboring provinces, namely Banten and West Java, only have 1 general practitioner per 10,000 population. Similar portraits also occurred in the provinces of West Sulawesi, East Nusa Tenggara, West Sulawesi, and Maluku.

Apart from the lack of doctors, their distribution is also a problem. The establishment of the FoM at PresUniv is expected to contribute to solving these challenges.

The Faculty of Medicine, PresUniv, will have several advantages. First, the campus is located in the Jababeka industrial area, the largest industrial area in Southeast Asia. This area is home to 2,000 national and multinational companies from various countries. All these companies employ about 1 million employees, including expatriates. For this reason, the Faculty of Medicine, PresUniv, will pay great attention to issues of Occupational Health and Safety in the industrial environment.

Second, the Faculty of Medicine, PresUniv, will focus on primary health services by increasing preventive and promotive efforts. The FoM will not only carry out the function of education but also want its presence to have an impact on the community. This will be achieved through a series of community service and research activities.

Third, lecture activities at PresUniv use English. This also applies to the Faculty of Medicine. Nowadays, the ability to speak English is very important. Many journals, scientific publications, or international events use English. In addition, English is also required for PresUniv students or graduates who want to expand their network to an international level.