Kota Jababeka lies 35 kilometer east of Jakarta’s Central Business District and covers the Cikarang area, which is part of the Bekasi regency. The regency of Bekasi covers a total area of 150,000 hectares and shares borders with regency of Karawang in the east, Bogor in the south and Jakarta in the West. The Java Sea lies to the north of the Bekasi regency. 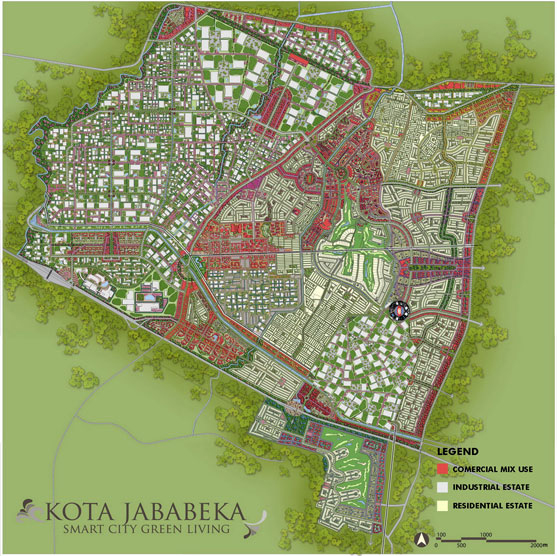 Kota Jababeka can be conveniently accessed from the Bekasi-Cikampek toll-road (highway) and is served by the Cikarang Barat & Lemahabang kilometer 31 toll gate (exit toll road at kilometer 28). Commuting time between Kota Jababeka and central Jakarta by car is approximately 1 – 1,5 hours.

Kota Jababeka is a mature township development, of which approximately 60% has been developed out of a total of 5,600 hectares of land area. It is a self-contained industry-based township that is home to more than 1,700 local and multinational companies from over 30 countries, such as The United States, Japan, France, The United Kingdom, The Netherlands, Australia, Korea, Singapore, Taiwan, Malaysia, and numerous others. Kota Jababeka has industrial, residential and commercial developments, a public transportation network, shopping, leisure and entertainment establishments, as well as a dry port, power plants, two water treatment plants, two waste water treatment plants and numerous other facilities.


Young, vibrant and entrepreneurial, Jababeka is fast becoming an economic hub in Indonesia for industry, business, investment, major events and education. With a strong economy and record of growth and stability, the city's diverse population and ever-growing infrastructure contribute to the reason our students graduate with the knowledge, attitude and experience needed to succeed both within Indonesia and on the world stage.

Home of 1700 Multinational Companies from 30 Countries.

Ratio of companies in Jababeka by country of origin